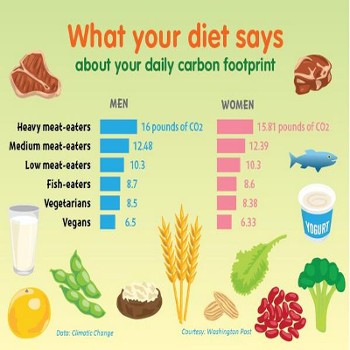 Very interestingly, if you talk to people asking them what they consider to be among the most critical issues in the world currently, they always use to name climate change to be among those challenging problems that needs to be controlled before it develops its hazardous impact on the world. Of course, the catastrophical effects can already be observed in some countries of the world. Even more interestingly, people could take a decisive step and avoid a future that is going to face huge climate changes in the  long run if they were only willing to change some of their habits. Below you find 16 reasons that prove how the vegan lifestyle might not only be the best solution to a dramatic ongoing climate change but probably also the only remedy for this critical issue.

“Every day, we hear about the dangers of climate change. But what if there were just ONE thing we could all do to help stop it?

The global demand for meat and animal products is wreaking havoc on our planet. Read on to learn why choosing vegan foods is the best thing you can do to help the environment (and animals, of course!).

1. Animal agriculture causes an estimated 18 per cent of all greenhouse gases.

That’s roughly equivalent to emissions caused by the entire worldwide transport sector – every car, plane, train and boat on the planet combined.

2. Raising livestock causes 65 per cent of all nitrous-oxide emissions. Nitrous oxide has 296 times the global-warming potential of carbon dioxide.

Oh, and it stays in the atmosphere for up to 150 years.

3. Even the UN admits that the livestock sector is “one of the top two or three most significant contributors to the most serious environmental problems, at every scale from local to global”.

Are you going to argue with the UN?

4. Meat consumption is thought to be one of the leading causes of modern species extinctions.

As land is cleared for animals to graze or to grow feed for them, wildlife is losing out.

The smell of climate changes stinks!

6. Emissions for agriculture are projected to increase 80 per cent by 2050.

If we don’t act now, these problems will get a whole lot worse.”