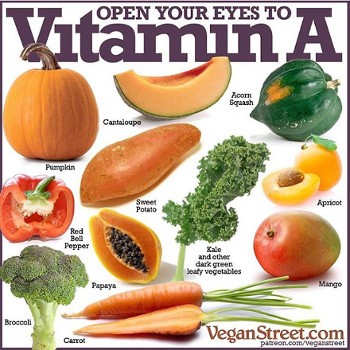 Definitely, Vitamin A belongs to the most essential vitamins. It accounts for so many health benefits: It protects your skin, promotes a healthy skin, boosts your immune system, plays an important role with healthy aging and even supports a healthy blood flow just to name a few of its benefits. Although Vitamin A can also be partly obtained by the consumption of meat, plant-based foods are much more recommended as those foods are not linked to those hazardous and toxic sideeffects such as inflammatory properties which are followed by dairy and animal foods. Below you will find the best plant-based sources for Vitamin A. Make sure to take full advantage of these extremely healthy foods.

“You’ve probably heard of Vitamin A before, as it’s also called beta-carotene (an important antioxidant) when obtained through dietary sources versus Vitamin A supplements. Found abundantly in fruits and vegetables, this vitamin can do everything from keep your skin healthy, to improve your immune system function and more.  Vitamin A is easy to get in a plant-based diet and is essential for healthy aging, protection of the skin and other major organs. It also aids in the production of healthy blood and cellular function.

An important part of your immunity, Vitamin A helps fight off free radicals, reduces inflammation, and can also enhance the color and appearance of your skin, hair, and eyes. It’s also been found to reduce the rates of cancer and even acne. Plant-based sources of Vitamin A also come with fiber, other antioxidants such as Vitamin C, and as you’ll see below, tons of flavor!

Eat your way to a healthy immune system and natural glow with these plant-based foods.

Carotenoids are the type of Vitamin A found in plant-based foods, while animal sources are known as retinoids. Both types are chemically different and both improve immune function, however,   carotenoids have greater antioxidant protection and they also play a special role in the protection of our eyes. (Hence, why carrots are said to be good for your eyes!)  For examples, carotenoids are actually found inside the retina of the human eye! These are known as lutein and zeaxanthin. This can help prevent poor eye health issues, such as  age-related macular degeneration. To get the most benefits of caretonoid sources of Vitamin A, it’s important to eat sources of Vitamin A that also offer lutein and zeaxanthin, such as kale, spinach, kale, and Swiss chard. And if you’re wondering if you need retinoids to make up for not eating animal foods, you needn’t worry, because the body actively converts caretenoids into retinoids naturally to provide complete cellular support for a healthy immune system.

Carotenoids from Vitamin A found in plant-based foods specifically help to fight cancer, because they play a role in stopping the overgrowth and mutation of cells that lead to cancer. Carotenoids help ensure proper communication of cells so overgrowth does not occur, which is one reason they’re so highly recommended for foods to fight cancer naturally. Foods rich in orange hue are sure indicators of beta-carotene (carotenoids), while some other sources such as leafy greens are also good sources (though not bright orange in appearance). Even some fruits such as cantaloupe are also great choices.

Anywhere between 700 micrograms to 900 micrograms is enough for an adult over the age of 18 years old, which is less than what you’ll find in a whole sweet potato or a cup of carrots, making it easy to get enough.  Vitamin A should be obtained through foods whenever possible to prevent toxicity from supplements. Though a supplement is an easy source, overdosing through supplement (non-whole food) form, can be toxic to the liver and is not the best way to protect your cells. Plant-based sources are not toxic, even in high doses (though you may notice your skin start to glow or even turn orange as a result that you’re eating too much).

If you want to learn about my favorite source for vitamin A, click here!