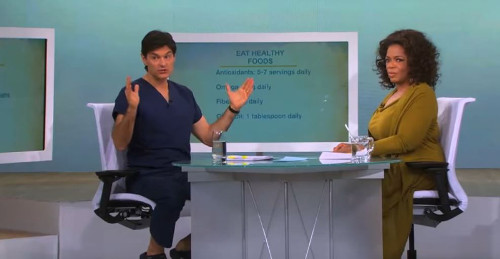 When a very popular heart surgeon being also a renowned health expert and daily talk show host encourages his audience to pursue a vegan diet, people seem to listen. In fact, Dr. Oz challenges his more than one million fans who followed his “21-Day Weight Loss Program” to adopt a vegan diet if they want to make sure to lose weight and keep an ideal weight while diminishing dramatically the risk of falling victim to serious diseases such as cardiopathy, diabetes and any kind of cancer. “If you love how you look and how you feel, going vegan is going to be the next step to take you to the next level”, as he puts it. Besides, he predicts the vegan diet to become the “single biggest movement of 2017” with more than 3 millions Americans currently pursuing the vegan lifestyle.

In the episode, “The Beginner’s Guide to Going Vegan Without Going Crazy,” Oz took a departure from holding up diseased body parts, and assured his audience that the vegan diet will be the “single biggest movement of 2017.” And he set out to bust a few myths about the on-trend diet as well.

“[A]s a heart surgeon, I recommend the lifestyle, because it’s low in saturated fat, it’s high in fiber,” he said on his show Thursday.

The vegan diet excludes any foods derived from animals: meat, eggs, dairy, fish–even honey. The diet is rooted in ethics, but there are many reasons the vegan diet is so relevant right now: scientific research continues to point to the environmental benefits in decreased animal consumption–from reduced methane emissions to cleaner water, the benefits to the planet are undeniable.

And as Dr. Oz highlights, the benefits to human health are not insignificant. A balanced vegan diet high in fiber, healthy fats, and fruits and vegetables can help with weight loss and maintaining an ideal weight, as well as reduce the risk of certain diseases including heart disease, diabetes, and even some forms of cancer.

With help from Terry Hope Romero, longtime vegan and author, Dr. Oz highlighted some key foods to incorporate in transitioning to veganism, including beans, quinoa, and sweet potatoes.

Dr. Oz recommends the vegan diet as the best way for the more than one million followers of his 21-Day Weight Loss Breakthrough program to keep their weight loss goals and improved health momentum going. “If you love how you look and how you feel,” he says, “this is going to be the next step to take you to the next level.”

He put to rest the myth that vegans can’t eat anything–that being vegan is a limited and unfulfilling diet. He also helped prove that vegan food is delicious, and that it can effectively and seamlessly take the place on animal products. Guests who tried some plant-based alternatives to meat and dairy were impressed with the flavors and textures.

Dr. Oz noted that more than 3 million Americans are now eating a vegan diet, saying that it’s gone from niche to next door, “we all probably know someone who’s vegan,” he noted.

“And here’s the big deal,” he said. “Studies continue to show people who live like this end up being healthier, feeling better, and living longer.”