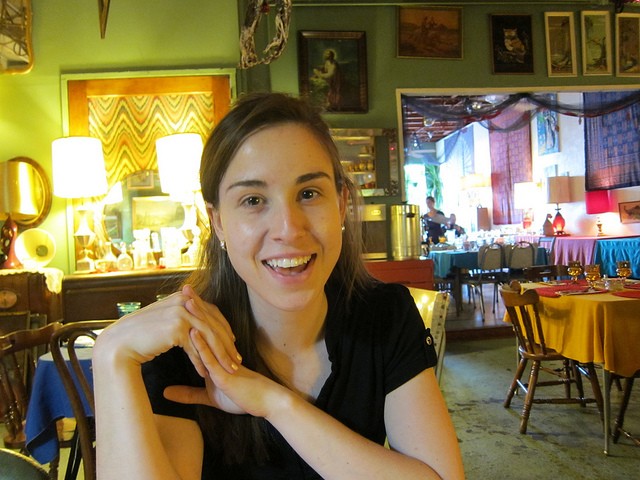 Well, this story of an one-month-old vegan got my attention instantly. Elisabeth tells very honestly about her transition to the vegan lifestyle. She is very blunt about telling the good and the difficult of this process. Most interesting about it is the learning curve she experienced after she had made up her mind to take that route. It’s remarkable that she also points out that a vegan lifestyle is not necessarily related to a healty way of living if one should take the wrong eating decision. As a result, however, she realized that the route she had taken was more than worthwile in the end.

“A little more than a month ago, I expanded Team Greenie Pig to four and set out on a month-long challenge to eliminate animal products from our diets. Would we discover an entirely new way of eating? Experience a miraculous increase in vitality? Or crash and burn spectacularly over an irresistible salumi plate? And would any of us end up converting wholly to veganism?

One thing we all agreed on: We learned a lot. Now it’s your turn: I encourage — nay, dare — you to try the vegan experiment yourself. It’s challenging, surprising, and utterly worthwhile. But before you do, here are some of those lessons we learned along the way.

Surprise, surprise: Departing from the eating and cooking habits you’ve developed over decades — particularly if you developed them in contemporary, fast-food-lovin’, steak-and-potatoes-havin’, pizza-partyin’ America — is challenging. I normally eat meat sparingly and front-load my plate with veggies anyway, and still I found the strict vegan thing to be hard.

It’s the little things: I missed butter and cheese (way more than meat). A bunch of my favorite whole-grain products were blacklisted for their honey content. I struggled with suddenly becoming the “difficult” guest at dinner parties and evenings out. Convenience foods got a whole lot less convenient. And eating well requires research: “The real start-up cost to veganism is a massive increase in the amount of time it takes to evaluate, plan, and execute great food,” notes my fellow vegan-for-a-month, Matt.

I’m sure this gets easier with practice. But insisting that a paradigm shift in dietary habits isn’t hard is a real disservice to anyone who’s struggling to adjust to it.

But not that hard.

People generally reacted to our experiment in one of two ways. One, “Oh YAY! Being vegan is the best!” or two, “I could never be vegan.” As a former member of camp two, I can honestly say: Yes, you totally can. Sure, there are roadblocks. But the food can be sublime. And while I missed some taboo items, I didn’t miss them as much as I expected. More importantly, the requisite scrutiny of what you put in your belly is enlightening. Forcing yourself to think harder about what you’re eating and where it comes from is habit-forming. And that’s a very good thing.

Don’t do it all at once.

For the sake of this experiment, we quit animal products … precipitously. (Ha! You thought I was going to say “cold Tofurky,” didn’t you?) If you’re serious about veganism sticking, don’t do this. You need time to learn new recipes, stake out the best vegan restaurant options, spread the word so your friends won’t tempt you with pork burritos, and allow for the occasional indulgence (all the better if it’s a local, organic, and humane one). Dip a toe, maybe wade in and splash around a bit before you do that cannonball.”

To read the rest of the article, check it out on the original source over at Grist.org.