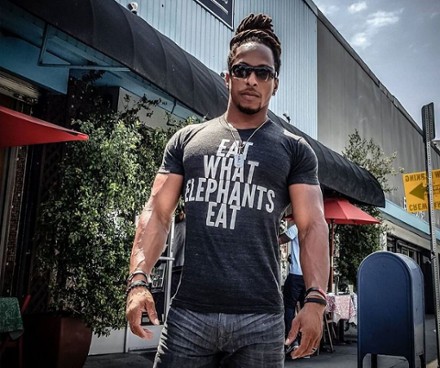 Now, the story of this likable young man is really interesting. He grew up in a family who had been vegetarian because his mother resigned to meat due to religious reasons. However, it was not until 1998 when he became full vegan. He was excited about sports so made the decision to give up his job as an engineer for Honda in order to become a professional bodybuilder. In comparison to so many other bodybuilders, this young man, Torre Washington, is an all-natural bodybuilder meaning his success has never been achieved due to performance-enhancing drugs but are the results of plant-based food and regular workout. He has become that popular that people ask regularly for his advice when it comes to get in shape. Read on to learn more about his awesome career as a bodybuilder.

“I did not grow up eating meat because my mother was a Seventh Day Adventist and health and vegetarianism are part of the religion. We moved to Jamaica for a few years to live with my grandparents, and it was during that time that we did eat some meat. After a while, I did become vegetarian again, but this time it was due to the Rastafari belief in an “ital” vegetarian diet.

I went full-force vegan in 1998. When I first decided to stop eating all animal products, I didn’t even use the term ‘vegan.’ Veganism is huge now, but I didn’t know the name for it then. It’s been my lifestyle for so long that I don’t know any different, and I don’t want to. People within the bodybuilding industry encourage me to eat meat or drink whey protein shakes to get even bigger. But I’m happy with where I am. I’m winning competitions and my lifestyle does no harm to others.

My Journey to Becoming a Professional Bodybuilder

When my brother and I first moved to Jamaica from Alabama, we had thick Southern accents. Other kids picked on us, so I needed to have an outlet and to get strong. I started to do push-ups and work out with free weights. After we moved back to the

I played football and ran track during high school, but never competed as a bodybuilder. It wasn’t until after college that I thought about getting on a stage. I watched a friend of mine compete as a bodybuilder and I was inspired. I decided that I didn’t want to lie on my deathbed and regret never having tried, so I told my friend that I wanted to compete the next year. This was in 2008.

My friend couldn’t help with my diet since I didn’t want to start eating meat, but he did encourage me with training. In 2009, I competed in my first show and got third place. I was so excited and signed up for another one. I won that second show and I’ve never stopped. Now, four pro cards later and an incredible win at Musclemania, I’ve decided to do this full-time. I left my day job as an engineer for Honda earlier this year.

I’m an all-natural bodybuilder, which means I don’t take performance-enhancing drugs. I recently competed in the Arnold classic, which is not a natural show (meaning that they don’t test you). I was thrilled to be accepted to compete in it as an all-natural athlete. For many years, I just enjoyed competing but was very private about it. I never had any intention of becoming known as a “vegan athlete.”
But as time went on, people within the community began to ask me for tips and for training help. As the conversation went on, I’d find myself talking about my vegan lifestyle and dispelling myths about building muscle mass on a plant-based diet. It’s been an amazing experience now, seeing that something I love to do is an inspiration to others.”

Read the full article at Forksoverknifes.com!