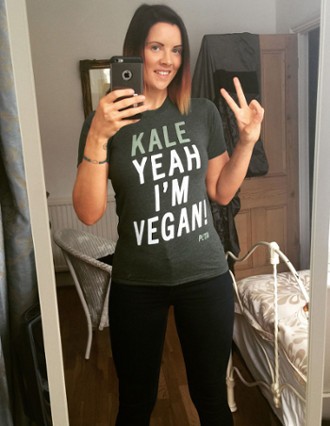 Sometimes you happen to talk to people who are so adapted to their lifestyle, especially to their diet habits, you could never imagine they would ever change their minds. They seem for what reason ever to have a pure conscience when it comes to distinguish between the animals they love and those they eat. In fact, this was also the story of this woman who spent her entire childhood on a farm. Becoming vegan was for her something she thought would be impossible to go for. Read on to find out why she changed her mind!

“If someone had said to me at the start of this year that I’d be vegan in seven months time I would have told them not to be so stupid – seven months ago meat was firmly on the menu. I lived on a farm for most my childhood, surrounded by pigs and sheep and a load of pets, and had accepted one kind of animal you love, and another you eat. Animals have always been a huge part of my life. I would have always gone as far as saying I love animals – yet I ate them.

Weirdly, I didn’t have to try very hard to cut meat out of my diet. After my preventative double mastectomy was out in the open I received a lot of messages from people (some nice & so not so) suggesting I didn’t need the operation, and instead what I needed to do was to change to a plant based diet to avoid cancer. Right. While this didn’t stop me having the operation I did find it a really interesting concept…

I decided I’d try being Vegan for a week so I could blog about it. I loved it. I was cooking from scratch using fresh ingredients, due to my need to read food labels to see if they contained anything not vegan I was learning about how much crap goes into the food we buy, and I had so much energy. I was loving the food and after a week I decided I didn’t want it to stop, so I have kept going.

I was worried what my friends and family would say. If they’d criticise and question my choices. Why did I go vegan? Health benefits are of course a huge factor for me, but more than that was to finally address how I had been in denial about the fact I ate animals for a long time. If someone tried to tell me about how animals where farmed & treated I’d make a joke about it or come back in a defensive manor with a fact that made me feel slightly more justified in my meat eating. Either way I avoided the truth to serve myself and my wants.

I truly feel our connection to what we eat, how it gets there, to where it comes from and the process it takes has been truly lost. Some animals we love and treasure as pets, where as others we slaughter in inhumane ways to eat or wear; we imprison them into an unnatural life until they are no longer of use to us, and are killed. Really an animal is an animal. A human is an animal. Like us they all feel pain, suffer from stress, get frightened and deserve respect.

It’s a process. I am moving over to vegan cosmetics and vegan products for bathing and moisturising. Your skin is your biggest organ and it absorbs what you put on it. When you make this decision to become aware of what you put in your body and on your body, it’s a real eye opener.

Life is about learning. I’m not here to judge or to tell anyone else how to life their life I just want to write about how I live mine. Why? Because that’s how I have learn so much about myself. It’s how I grow and continue to grow.”