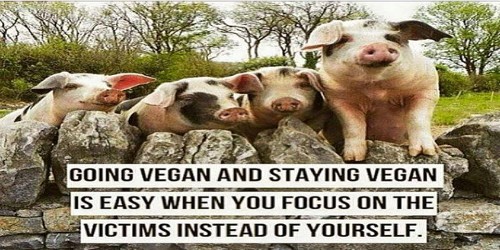 Although meat consumpton has dropped about 12 percent in the last 5 years due to many articles and videos revealling the horrible conditions animals are being held in and the incredible sufferings they need to undergo, the U.S. is still the country with the highest meat consumption in the world. On the one hand, this means it has the longest way when it comes to go for a vegan lifestyle in comparison to other countries. On the other hand, and this is much worse, it accounts for the most environmental issues caused by an excessive meat consumption. In fact, this vicious circle could be stopped very easily since factory farmers would finally collapse if meat consumption would drop significantly. Some horror but yet true videos have already contributed significantly to make people completely change their way of living. However, it’s still a long way to go!

“It’s the kind of image that is really difficult to forget.

A disturbing undercover video shot by an animal rights activist released earlier this month showed pigs being subjected to horrific conditions inside one of the nation’s largest pork processing plants. The video went viral and Hormel, the sole customer of that plant, has reportedly called for tighter controls and extra training as a result.

The incident raises uncomfortable questions about how the American food system operates. Such videos might be playing a role in a significant reduction in per-capita meat consumption — an estimated 12 percent in five years, according to the latest U.S. Department of Agriculture projections. Still, the U.S. is a world leader in meat consumption, bearing a significant environmental and public health burden.

The high demand for meat encourages the type of factory farms — industrial operations that raise large numbers of animals for food — associated with abusive conditions, according to Paul Shapiro, vice president of farm animal protection at the Humane Society of the United States. Until we cut back on meat even more, we’ll likely see more of the same, no matter how many whistleblower videos surface.

The Huffington Post recently spoke with Shapiro about the link between factory farming and Americans’ love for all things meaty.

HuffPost: At a recent food policy event, you said that until Americans seriously reduce their meat consumption, the sort of factory farming like what was going on at that pork plant will never stop. Could you unpack that a little?

The high demand for meat is what is driving factory farming, which is perhaps the biggest environmental problem on the planet. It’s a gigantic use of water, land and fossil fuels. Animal agriculture is the leading cause of deforestation and is responsible for more greenhouse gas emissions than the entire transportation industry combined. There’s no way to eliminate factory farming without substantially reducing our consumption of meat.

A lot of people were outraged about that plant and shared the story but do you think that will translate to forcing the industry to change?

The meat industry, as it usually does, is acting defensively in response to this recent expose. At the same time, interestingly, within a few days I noticed that this video had more than 1 million views on YouTube. No doubt, a good number of people will think twice about how much meat they’re eating. It’s too early to say if change will come about as a result. At the same time, I think a lot of consumers have even more doubts than before that the pork industry is an industry they want to be supporting.

Do you believe there is proof that those doubts are having a real impact, though?

In the last eight years, per-capita meat consumption in the U.S. has declined by about 10 percent. That is a very modest reduction but considering it had only been increasing year over year for decades, it’s certainly a positive sign. Even Hormel, the subject of this investigation has been diversifying its own portfolio to include plant-based protein, buying Skippy peanut butter for example, recognizing that the company should not be solely focused on animal-based protein. Most of the biggest meat brands, ConAgra and Kraft and others, have also diversified their own portfolios by adding plant-based protein alternatives like Morningstar Farms and Gardein. Animal protein companies see the writing on the wall that the future is going to be more plant-based.”

Read the full interview at huffingtonpost.com!