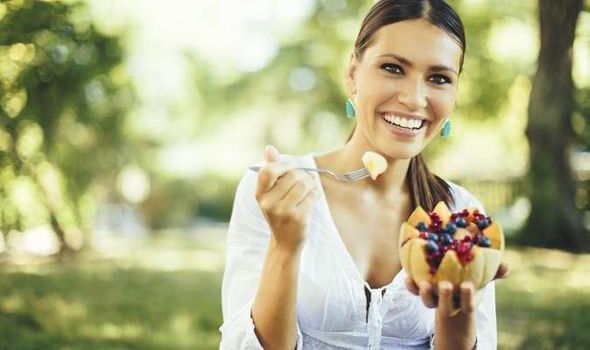 After very beautiful women like Beyonce,  Stella McCartney, Ellie Goulding and Jennifer Lopez have joined the vegan journey people start to reconsider their diet habits more frequently. Those women are not only rewarded with awesome health benefits by going vegan but also by a much more beautiful and younger skin since the vegan diet consists of a wide variety of fruits and vegetables which nourish the health of the skin, hair and nails resulting to an appearance that literally glows with health. As a consequence, they look more beautiful. People who suffered constantly from an irritated skin or from acne discovered that their skin became clear, young and healthy again after they had adopted a vegan diet. So, there is obviously a significant connection between a vegan diet and an overall skin health. However, there are many more benefits of a vegan lifestyle that makes you look younger and more energetic such as a dramatic improvement of the quality of your sleep. Anjali Sareen has written an excellent article in the Huffington Post listing many more qualities that come along with a vegan diet.

“When I first made the decision to adopt a vegan diet, many of the more “seasoned” vegans in my life told me about all the wonderful benefits I could expect. I heard that I would likely drop unwanted weight more easily, that I would have more energy and that I wouldn’t have to worry as much about things like heart disease or cancer.

Those things all sounded great, but after I went vegan, I discovered a whole world of benefits no one had ever told me about.

The first was that seemingly overnight, my skin turned from an acne-prone mess into beautiful, clear, healthy-looking skin. I had struggled with acne my entire teenage life and into my early adulthood, and to be completely honest, I had tried everything to help solve the problem. Harsh chemicals on my face, eliminating junk food, facials — the works! Little did I know my dairy habit could have been the culprit for my constantly-irritated skin. Turns out, there is a link between ditching dairy and improving your skin’s overall appearance. I wish someone had told me so I could have chucked it sooner!

The next “secret” benefit I discovered was that I slept better than ever. I have a reputation among friends and family for being able to sleep for unusually long amounts of time, but after I went vegan, I realized a lot of that was because the quality of my sleep had always been terrible. After I went vegan, I found that I was sleeping for less time each night but waking up more refreshed. Turns out, it wasn’t just me: A study on the physiological benefits of a vegan diet found that subjects who switched to eating purely plant-based reported an improvement in the quality of their sleep.

I also read some anecdotal evidence from older vegans about how they felt their diet had slowed down their aging. It was certainly nice to hear that the way I was eating might help me stay young!

I wasn’t alone in finding “secret” benefits to my new diet. A friend of my sister’s went vegan and nearly overnight her battle with IBS stopped. The dairy, it seemed, was upsetting her stomach and going vegan eliminated her troubles. Another friend saw his bad cholesterol levels plummet. This isn’t super unusual, I learned, as only animal products contain dietary cholesterol. Still another friend saw his allergies disappear.

Besides the physical benefits though, there were also some great “life” benefits. One of the first was that almost immediately, I discovered a whole community of friends I was missing out on — not just vegans, but those interested in better health and environmental sustainability. It wasn’t fun to be at work and invited to a gathering where I knew everyone would be chugging beer and eating greasy pizza, so I welcomed meeting people with similar interests. To be completely honest, the veggie potlucks I was invited to certainly helped improve my circle of friends (not to mention, they were delicious!).”

To read the rest of the article, check it out on the original source over at The Huffington Post.