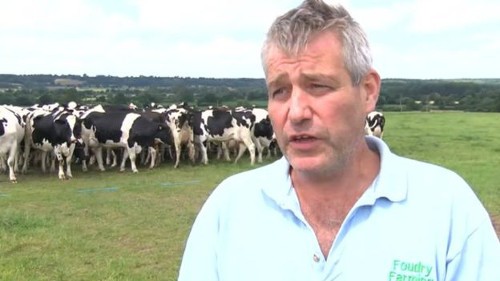 Reading about the closures of more than 1,000 dairy farms in this country due to a dramatic price decline down to about 10 pence a litre which is less than the cost of production is on the one hand definitely bad news for farmers who struggle to just survive. However, on the other hand considering the fact that consuming milk has a hazardous impact on one’s health it challenges people to look for alternatives with outstanding health benefits such as almond milk or coconut milk just to name a few. It’s still a tragedy that dairy products are praised to be healthy although the exact opposite is the case.

“Nearly one in 10 dairy farms across England and Wales have closed in the last three years, an industry body has reported.

More than 1,000 have closed since June 2013, according to the Agriculture and Horticulture Development Board (AHDB).

North Yorkshire lost 89 farms, the highest total of any county, while Berkshire saw the greatest rate of decline with a third of farms closing.

The board said it was concerned by the milk price paid to farmers.

An AHDB spokesman said some farmers were still paid about 10 pence a litre less than the cost of production, despite protests by the National Farmers’ Union last year.

In total, 1,002 farms have closed over the three-year period.

Yorkshire dairy farmer Jeremy Holmes said traditional dairy farming was “in a mess”, with “far too much milk on the market”.

He said he had survived by buying a vending machine to sell raw milk on his farm at Denby Dale near Huddersfield at £1 per litre – about three times the price paid by supermarkets.

Regulations mean raw milk can only be sold on farms, which means supermarkets cannot compete with producers.

Mr Holmes added: “You are connecting yourself with the consumer directly, and it’s literally the freshest milk from the cows.”

Supply and demand has led to the cost of milk plummeting across the UK.

Farmer-owned dairy Arla has teamed up with Asda and is launching a £1.50 four-pint carton of milk, where 25p will go back to the dairy co-operative.

David Christensen, whose Oxfordshire farm produces 5,000,000 litres of milk for Arla a year, said: “It has been really tough over the last two years, supply and demand have really been out of balance.”