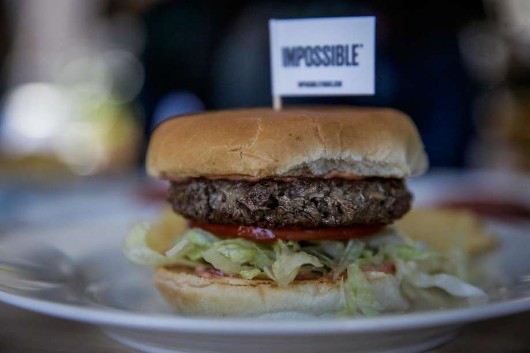 It’s always the same story when people refuse to go vegan because of their addiction to meat. They say they just can’t resign to the flavor of meat. Meanwhile, they are even options to eat vegan burgers that claim to taste like “real” burgers. However, the vegan burger that came out last Thursday seems to fully answer the demands of those meat-addicted people by offering them a plant-based alternative that gets so close to beef that it “bleeds” as  Traci Des Jardins, the chef-owner of Jardiniere, puts it. This vegan burger also seems to be the first one you need not only to stand in line for several hours but even to order it in advance as it had been sold out so fast last weekend that the restaurant started to issue tickets to order it.

“Has there ever been a burger in San Francisco so popular that you needed a ticket to order it?

This Thursday, Jardiniere and Cockscomb began serving the Impossible Foods burger, a plant-based beef substitute that approximates beef so much that it “bleeds.” (As The Chronicle described in our feature about the burger and its closest competitor, the “blood” is heme, a plant-based molecule that resembles the hemoglobin in blood.)

According to Traci Des Jardins, chef-owner of Jardiniere, on Thursday lines formed outside her restaurant several hours before the burger went on sale. The restaurant has sold out so quickly that it now issues tickets at 7 p.m. just to make sure it can meet all its orders.

Des Jardins has been consulting with Impossible Foods for a year now, advising the Redwood City-based firm as it moved from, as she says, “a science company to a food company.”

“I was compelled by the idea [of the burger] in the context more of sustainability,” she says, “how to supply our growing population with viable alternatives to meat.”

Jardiniere is one of three West Coast restaurants launching the burger, which debuted at David Chang’s Momofuku Nishi in New York City in July. Des Jardins cooks the patties in cast-iron skillets and serves them on (vegan) Acme buns, topped with Dijonnaise sauce, caramelized onions, avocado, cornichons, and lettuce and tomato. The Hayes Valley restaurant is only selling the burger in the lounge after 7:30 p.m., once the pre-theater rush has been served. (Chris Cosentino’s Cockscomb is selling the Impossible Foods burger at lunch.)

“People are really enthusiastic,” Des Jardins says. “It’s a very different demographic than we get at Jardiniere, so it’s fun for us.” Younger diners make up the bulk of the burger eaters, and only a few longtime vegetarians have been grossed out by the burger’s beefy verisimilitude.”