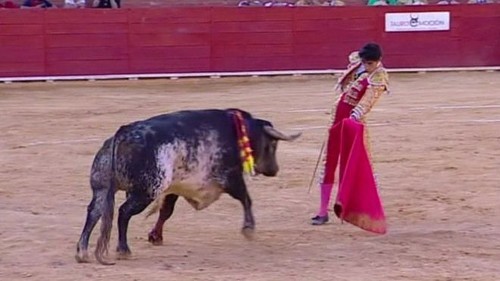 Very probably, anyone who cares about animals considers bullfighting a really cruel and weird kind of entertainment. However, the issue became explosive again after a bullfighter had died during a bullfight about two months ago at the young age of 29 in Spain. It must have been a horrible scene since the bullfight had been broadcast live on television. In fact, it has been a very long time since a bullfighter was killed in Spain. Victor Barrio, the bullfighter who had been killed, was the first one who had died during a bullfight in Spain since 1985. This sad news should be reason enough to ban bullfighting finally!

Victor Barrio, 29, a professional bullfighter, was killed when the bull’s horn pierced his chest.

The fight, in the eastern town of Teruel, was being broadcast live on TV.

Also on Saturday, a 28-year-old man died after being gored by a bull during a bull run through the village of Pedreguer, near Valencia.

The last matador to die in a bullfight in Spain was Jose Cubero, or Yiyo, in 1985.

Television footage shows the bull throwing Barrio into the air before goring him on the right-hand side of his chest and violently throwing him.

A comment on the official feed of the Las Ventas bull ring in Madrid, where Barrio began as an apprentice, said it was “distressed and very moved” by his death.

El Pais newspaper said that in the past century, 134 people, including 33 matadors, had been killed by bulls in Spain.

Last year, leading matador Francisco Rivera Ordonez was badly hurt while taking part in a bullfight in the north-eastern town of Huesca.

About 2,000 bullfights are still held every year in Spain, but the numbers are falling. In 2010, Catalonia became the second Spanish region after the Canary Islands to ban the tradition.

Opponents describe the blood-soaked pageants as barbaric, while fans – including Mr Rajoy – say the tradition is an ancient art form deeply rooted in national history.

In the other incident on Saturday, a man was killed while running alongside bulls in Pedreguer. Spanish media said he was trying to help another runner when he was gored in the throat and abdomen.

Meanwhile, in the San Fermin bull running festival in Pamplona on Saturday, a 33-year-old Japanese man was gored in the chest and a Spanish man in the arm. Another 12 people were injured, the regional government in Pamplona said.”