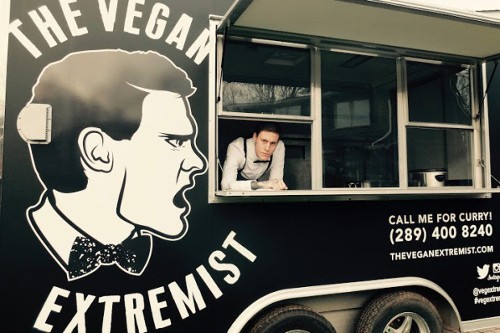 Vegans are often criticized for being rather extreme not only considering their own diet habits but also for pushing their food choices on others. This had also happened to Jeff Merkel, a 24-old likeable young man, who had been working in a kitchen of a restaurant surrounded by meat until he couldn’t bear it any more. He himself had always been vegan and although he had never pushed his diet habits and conviction on others he still had been accused for it. So, he thought to turn his extreme vegan reputation that was completely unjustified into a business. Who could have ever thought that extreme could have gone mainstream ever since!

“NO SALADS!” screams the sign on the wall. “MIX DRINKS NOT MORALS” yells another sign behind the bar.

And with that, the tone is set for a meal at Doomie’s, a no-meat fast food joint in Parkdale that is as forceful about what’s on its menu as what’s not.

Doomie’s is part of a trend in Toronto that’s seen veganism take an abrasive turn, with so-called “extreme vegan” cooks pushing in-your-face ethics, making the case that not eating animals is a morally superior lifestyle.

And to even the chef’s surprise, the vegan-or-nothing attitude is not putting off restaurant goers. In fact, judging by the lineups, it’s attracting them.

Jeff Merkel wears combat boots in his food-truck  — not traditional combat boots, though. They’re vegan combat boots with not a stitch of leather to be found on them.

Merkel says his truck will be Toronto’s first all-vegan mobile restaurant when he gets his mobile food license, which he hopes will happen in June. The non-leather boots and his vegan cooking symbolize Merkel’s attitude toward food: he is a self-described vegan extremist, an avowed enemy of meat-eating. And fittingly, he’s called his food truck The Vegan Extremist.

“We took a risk with the marking idea,” Merkel admitted. “But that’s who I am.”

Merkel only had a brief restaurant career before launching his food truck. He was working in the kitchen of a gastropub, surrounded by meat. “It was gross. Brisket, hamburgers. I couldn’t be there,” he said.

he 24-year-old has always been vegan, but he was also always careful about leaving meat-eaters alone. That is, until recently.

“Vegans have the reputation of being in other people’s business telling them what to eat,” he said. Because of that reputation, he was often criticized for trying to push his food choices on others, even when he wasn’t.

“People were accusing me of it anyway, so I thought, ‘Why don’t I just embrace the whole vegan extremist thing?'”

When he started, he figured he’d anger some people. Meat-eaters can be defensive, he agreed.

“I expected at least once or twice that someone throws an egg at us,” he said. “But not once.”

Meantime, back at Doomie’s on Queen Street West, the chef has no trouble answering when asked, “Who would have expected a three-hour wait to get into an all-vegan diner in Parkdale?”

Read the full article at cbc.ca!