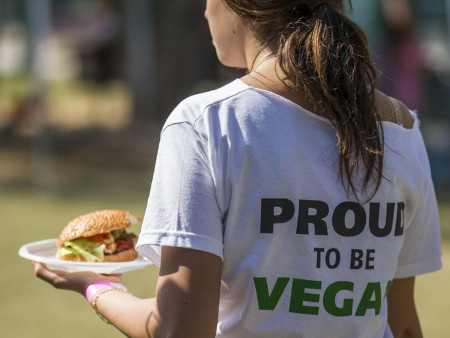 Many people start the new year with the so-called New Year’s resolutions. In fact, they want to change something about their way of living they seem to be unsatisfied with. Among these New Year’s resolutions, you might also encounter the term “Vegannuary” meaning that people want to try out the vegan lifestyle at least for a month. Very interestingly, many of those people who became vegan for only a month were so thrilled by this lifestyle that they went vegan for a lifetime ever since. However, particularly those people but also vegans in general use to face time and again very challenging questions by meat eaters or omnivores. The following article should give you an excellent idea of how to answer those provoking questions in the best and most convincing way.

It is January, and many of you vegetarians and perhaps some meat eaters too, will take the leap and try to go vegan, giving up all animal products for a month. Perhaps you’ll do it for health reasons, or in an attempt to shift a few of those Christmas pounds, or following a New Year’s resolution to try to live more consciously. Either way, as a vegan I can tell you from experience that you’ll need to be prepared for the barrage of stupid things people will probably say to you every time you sit down for a peaceful lunch and try to dig into your falafel wrap.

“Doesn’t a vegan diet make you unhealthy and weak?”

No, I am very healthy, thank you very much. I ran a marathon a few months ago. Vegans typically have lower cholesterol levels, lower blood pressure, lower body mass indexes, a lower risk of death from heart disease, and lower overall cancer rates than meat eaters. The Mayo Clinic in the US recently reported that a plant-based diet could add four years to your life.

In fact, leading athletes, including weightlifters, sprinters, ultra-marathon runners and boxers, are vegan. Venus and Serena Williams adopted a plant-based diet in 2012. Since then, Serena has won the US Open three times. Scott Jurek, widely regarded as the greatest ultra-runner of all time, eats vegan. The only US male weightlifter to qualify for last summer’s Olympic Games, Kendrick Farris is – guess what – a vegan.

“But where do you get your protein?”

The same places that cows, gorillas and elephants get theirs – and have you seen the size of an elephant? I am fine. Go worry about something serious like, say, global warming.

Which brings me neatly to the next stupid question…

“It’s a shame you don’t care about humans as much as you care about animals.”

Veganism is kind to humans because animal agriculture is the most destructive industry on the planet. The meat industry emits more greenhouse gases than all transportation in the world combined. A vegan diet will cut your carbon footprint by 50 per cent. The livestock industry also diverts grain from the mouths of the planet’s one billion starving people. Of those countries experiencing famine, 82 per cent use vast proportions of their grain to feed cows and pigs that will be eaten in Britain and other first-world countries. But hey, seeing as you raised the issue, let’s have a look at all the Nobel Peace Prizes you’ve won for your human rights work.

Meat-eating has indeed been going on a long time. So have lots of other crimes against humanity. Does their longevity legitimise them?

Read the full article at: independent.co.uk!