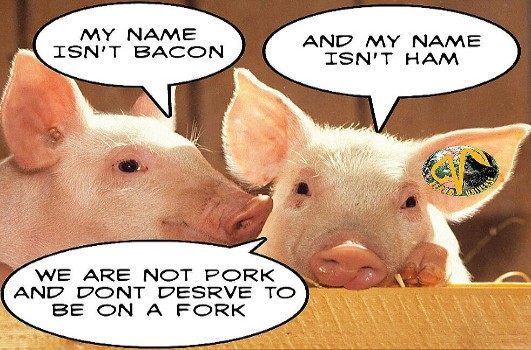 People who use to eat meat often defend their diet habits by bringing the argument into play that animals are no sentient beings meaning they lack of emotions and empathy. Nothing could be further from the truth! To put it with the words of the animal rights activist, Moby: “Clearly you either have to be delusional or a psychopath to believe that animals don’t suffer.” Pigs are not only sentient but also cognitive beings and are therefore among the very few species on earth that are able to recognize themselves in the mirror. Read on to learn more about it!

“Pigs are “sentient beings” with emotions and empathy similar to dogs, and they know what they’re in for when they enter a slaughterhouse, said an expert during the trial of an animal rights activist today.

Neuroscientist Lori Marino was one of two defence witnesses in the fifth day of the Anita Krajnc trial in the Ontario Court of Justice in Burlington, Ont.

Krajnc, founder of the group Toronto Pig Save, is charged with mischief for giving water to pigs en route to Fearman’s Pork Inc. on June 22, 2015. She has pleaded not guilty, and if convicted, faces a maximum $5,000 fine and jail time.

Marino, a founder of the Kimmela Center for Animal Advocacy, testified that pigs sense the emotions of other pigs through “emotional contagion.”

“Pigs are at least as cognitively aware as a monkey,” said Marino, commenting on a video of a slaughterhouse in Australia. The high-pitched squeals, she said, are “distress calls.”

Pigs have individual personalities, Marino said. They’re also one of the few species that can recognize themselves in a mirror.

“They have self-awareness, self-agency and have a sense of themselves within the social community,” she said. “Each one is a unique individual.”