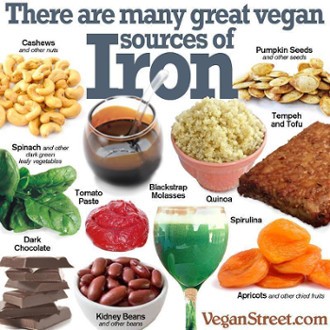 Well, considering the recommendations of the Dietary Reference Intakes (DRI) for iron specifically given for vegetarians, the odds are that they are more susceptible to show iron deficiency in their blood than others. This argument is given for two reasons: First, their need for iron intake is 1.8 times higher than for people who include meat in their dietary habits. Second, the absorption of iron which is found in plant-based food is less effective than the absorption of iron in animal products. However, does this necessarily account for an iron deficiency with vegans? I don’t think so because at the end of the day it all comes down not to the amount of iron intake but to its effectiveness regarding its absorption abilities. If vegans choose high iron-absorbing plant-based food, the odds are pretty good that they will avoid any iron deficiency issues.

“True or False: The iron that our bodies require is the same element found in a cast-iron skillet.

This is a real true or false question on my college exam, and it fools a surprising number of my students. Iron is greatly misunderstood as a nutrient, especially when it comes to vegetarian and vegan diets.

The mineral is found all over the earth and is essential to red blood cells transporting oxygen and nutrients to every cell in our body, connecting us directly to the land we live on. Pretty amazing, right?

But iron deficiency is the most common nutrient deficiency in North America, with symptoms including fatigue, pale skin, weakness and inability to maintain body temperature. And as vegetarians and vegans, it’s worth paying special attention to make sure we’re getting enough.

So how much iron do we actually need?

Recently in the U.S., the Dietary Reference Intakes (DRI) gave new recommendations for iron, specifically for vegetarians, that are 1.8 times higher than the general population. As my colleague Jack Norris points out, this increase is not based on actual research on vegetarians, but simply because the iron in plant foods is not as easily absorbed as the iron in animal products (more on this in just a minute).

As a result, many experts in vegetarian nutrition believe that these recommendations are much higher than needed.

My take on it: if you eat a varied, healthy plant-based diet that includes a balance of grains, legumes, nuts and seeds, and fruits and vegetables — and follow the recommendations below — I don’t believe it is necessary to keep close track of iron intake.

Iron from plants vs. iron from animals

To better understand what we need to do to ensure our bodies are getting enough iron, we first have to accept two facts about iron — painful as they are for vegetarians and vegans to hear:

But don’t fret your vegetarian brain over these issues. We’ll see that in fact it’s not all that difficult to get the iron you need on a plant-based diet.

As for #2, it’s important to note that while vegetarians have lower stores of iron than omnivores, they do not have higher rates of anemia. In the research, many vegetarians’ stores are “low-normal,” but this does not mean less than ideal! Actually, there’s some evidence that says low-normal iron stores are beneficial: improved insulin function and lower rates of heart disease and cancer.

How to get enough iron on a plant-based diet

You can start by making sure that you’re eating foods that contain substantial amounts of iron. Some of the best plant sources of iron include:

But here’s the key: It’s not how much iron you consume, but how well you absorb it.”

To read the rest of the article, check it out on the original source over at No Meat Athlete.