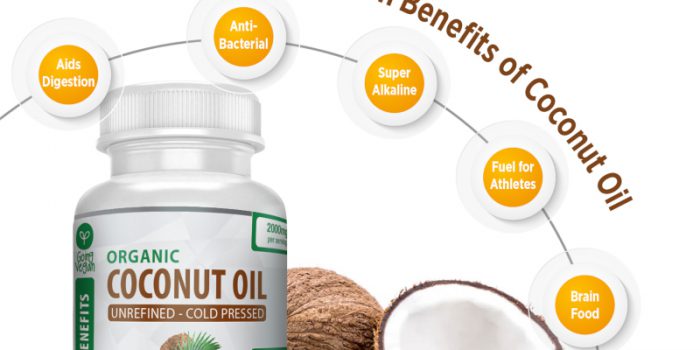 With every second self-professed ‘expert’ and celeb influencer proclaiming coconut oil to be a miracle food that can cure virtually every health condition, it’s hard to tell fact from fiction. While many of the claims about coconut oil health benefits are exaggerated, there’s plenty that we do know from research. So, let’s focus on the health benefits of coconut oil that are backed by science, so that you can make an informed decision when using this oil.

Many foods, fad diets, and supplements claim to promote weight loss, but coconut oil may actually deliver on such promises. Coconut oil is believed to speed up the fat burning process because of its high content of medium-chain triglycerides or MCTs. Research suggests that a daily intake of around 15 to 30g of MCTs can increase energy expenditure per day by 5%. Fatty acids in coconut oil can also reduce hunger or food cravings, helping lower your daily caloric intake – the best way to lose weight. While some of these connections may be indirect, one study looked specifically at the effects of dietary coconut oil intake on obesity. They found that daily supplementation with about 2 tablespoons of coconut oil could enhance weight loss, including abdominal fat, within just 12 weeks.

Although coconut oil was often vilified for its high content of saturated fats, it contains natural saturated fats. These can have a positive effect on cholesterol levels, an important marker for heart disease. Studies confirm that coconut oil intake actually increases good cholesterol or HDL, even turning the bad cholesterol into HDL. These benefits may be linked to the cholesterol lowering action of MCTs, as well as lauric, myristic, and capric acids that are found in coconut oil.

Coconut oil may help fight common infections by boosting immunity and through its antimicrobial properties. Most of coconut oil’s fatty acid content includes lauric acid, which forms monolaurin through digestion. Studies show that both substances can kill a wide range of disease causing pathogens, including the Staphylococcus aureus bacteria and Candida albicans yeast. What’s interesting is that coconut oil can even help treat pneumonia in children, when used as a supplement alongside antibiotics. Researchers found that this practice could improve symptom relief and recovery time.

The keto diet may be best known today for weight loss benefits, but it was actually designed as a therapeutic diet for drug resistant epilepsy. The diet focuses on high fat and low carb intake to increase ketone concentrations in the blood. For some reason, this reduces the incidence of seizures. Based on research, we also know that MCTs can induce ketosis and reduce seizures. Coconut oil could be a helpful supplement in dealing with epilepsy.

Coconut oil is not a cure for Alzheimer’s, nor can it prevent the condition. However, it may help to lower the risk and to improve patient outcomes because of those MCTs that we’ve mentioned before. In Alzheimer’s, the uptake of glucose is blocked in the brain, depriving it of energy. This can cause neurodegeneration and a decline in mental functions. Although more research is needed, coconut oil may help as MCTs could work as an alternative fuel source to preserve brain and nervous system function. A study that appeared in the journal Neurobiology of Aging does suggest that MCTs could improve brain function in mild cases of Alzheimer’s.

Coconut oil doesn’t just offer benefits when ingested, but can also be used in topical treatments. It works as a natural moisturizer that also provides antioxidant protection, restricting the impact of oxidative stress, which contributes to aging. With its antimicrobial properties, coconut oil may also fight common skin infections, lowering the risk of acne outbreaks and staph infections. Some studies suggest that it can promote wound healing.

Coconut oil has long been valued as a natural hair oil in Southeast Asia and it is increasingly being used in cosmetic products. Although coconut oil doesn’t increase or promote hair growth, it may actually strengthen hair follicles and reduce hair damage, which is known to cause thinning and hair loss. A study that appeared in the Journal of Cosmetic Science found that coconut oil could reduce protein loss in both damaged and undamaged hair.

Oil pulling, which is basically the practice of swishing oil around in your mouth, has long been propounded by Ayurveda as means to promote oral hygiene. The practice has now been shown to improve dental health, reducing the risk of gum disease, plaque formation, and bad breath. Coconut oil is commonly used in the treatment and is effective because of its antimicrobial and anti-inflammatory properties.  Just remember that it is possible to have too much of a good thing. When used in moderation and as per the recommendations however, coconut oil can transform your life for the better.

Click HERE to learn more about the awesome benefits of Coconut Oil!