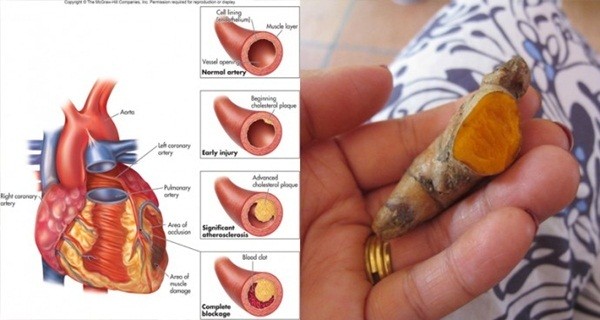 Today, I had to attend a vascular surgeon to have him check my varicose veins. Next to me, there was an elder woman who was obviously suffering from severe varices mentioning that she had recently undergone a heart surgery. In fact, she was a bit concerned that it could be followed by a vascular surgery which she considered to be very harmful to her heart being in that state of condition. If she had only known that the American Journal of Cardiology found out about turmeric and its amazing cardiovascular heart benefits reducing the probability of falling victim to a heart attack by 56% after a heart surgery, she would have definitely been much more relaxed waiting for the doctor to call her in and examine her varicose veins. Very interestingly, these research results published in the American Journal of Cardiology referred to another study which had been made in 2012 showing that a regular consumption of turmeric resembles the efficacy of an hour aerobic exercise regarding its vascular and endothelial health benefits. Now, just imagine what would happen if you combined the regular consumption of turmeric with regular physical activity.

“Undoubtedly, exercising is of vital importance, but newest studies have discovered that the turmeric extract is also beneficial for maintaining cardiovascular health. In particular, it is especially effective in women who are experiencing age-related negative changes in the arteries.

Unfortunately, conventional medicine would not even try to test the effect of this ingredient, but doctors instantly avoid the turmeric’s role against heart diseases. In contrast, a growing number of studies show that turmeric provides great effects in cases of cardiovascular diseases.
The last year’s study in the American Journal of Cardiology pointed out that turmeric extract reduces the heart attacks after bypass by 56%.  This study also includes another previous astonishing study from 2012,  which claims that curcumin, the primary polyphenol in turmeric which gives the turmeric its golden color, is proven to be effective in improving the vascular function in women after menopause similar to aerobic training.

This study, published in journal Nutrition Research, was conveyed on 32 women after menopause and lasted for 8 weeks. The 32 women were divided in 3 groups: curcumin, exercise and non-treatment control.

The researchers examined the health of the inner lining of the blood vessels which is known as endothelium. They used ultrasound to measure the flow-mediated arterial dilation which shows the arterial elasticity and endothelial function.

In case the inner lining of the blood vessels changes due to some factor, that change would lead to development of atherosclerosis. Therefore, in order to prevent the mortality due to heart diseases, we should try to find an effective solution to reduce, prevent or reverse the endothelial dysfunction.

The first group (curcumin group) consisted of women who consumed 150g turmeric extract every day for 8 weeks which equals 25 g of nanoparticle curcumin. During the course of the study, these women made no alterations of their diet, and they didn’t exercise.

The second group was exercising aerobic more than 3 times a week. Besides the 2-3 supervised trainings, they had additional training at home. Also, they were riding a bike and walking for 30-60 long minutes. In the first phase of the training, 60% of the participants had maximal heart rate and 70-75% maximal heart rate later.

The researchers found an increased flow-mediated dilution in the curcumin and exercise group so they stated:

Click HERE to get Turmeric Curcumin – The Power Fuel for Your Immune System!